I wanted to do a Print vs. Film for this, I really really did. I love comparing books and movies, and that was the whole reason I’d even read Shutter Island to begin with. A friend of mine forced me to watch the movie quite a while back (to be honest, I had no interest in it when it came out), and immediately after I decided to read the book. Some of you may even remember a post I did a while back involving it.

Now I’m sure you’re astute enough to figure out why I can’t compare the two, but for the sake of stating the obvious, I’ll tell you: They’re nearly identical. There are hardly any changes between the two, and trying to compare them would be like trying to compare white and ivory. Wait, those are different?

Either way, you get the idea. And that really only leaves one question: if they’re practically the same, is that a good thing, or a bad thing? 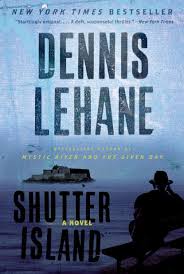 I was going to post the title and author here, but I’m pretty sure you can see it.

Shutter Island is a mystery/psychological novel written by Dennis Lehane. It follows the work of U.S. Marshals Edward “Teddy” Daniels and his partner Mark Ruffalo—er, Chuck Aule as they investigate the mysterious Ashecliff Hospital for the criminally insane. Located on Shutter Island and cut off from anything even close to resembling the real world, Ashecliff should not be confused with Alcatraz, Azkaban, or Arkham. However, just like all of those lovely places, somebody has managed to escape from Ashecliff with no trace of where they could have gone.

This story is not just a straight up missing person story either. Everybody on the island seems to be hiding something and Teddy instantly feels a need to uncover what is going on.  He covers the island in terrible weather conditions, potentially gets drugged, dreams/hallucinates about his dead wife, snoops, find the missing patient who tells him to run far away before he discovers the terrible things that are actually happening on the island, loses his partner (and is then told he arrived on the island alone), and discovers that he is actually a patient at Ashecliff. Wait, what?

As all of the mystery draws to a close, Teddy confronts the lead doc, Dr. Cawley. Only instead of confronting the doctor about the potentially illegal actions of the hospital or all of the awful things that seem to be happening, Cawley reveals that Teddy is actually named Andrew Laeddis, and is in fact the most dangerous patient on the island. Apparently Mr. Lehane might be a fan of Mr. Shyamalan’s work.

This is the 2nd time I’ve had to use this meme on this blog, and I’m still not tired of it. I may need help.

Obviously Teddy refuses to believe this, but once all of the evidence is presented, the memories come flooding back. One day he came home to find his clearly mentally ill wife, Dolores Chanel, had murdered their children. Andrew responded by having his sanity snapped & shooting his wife, resulting in his sentence to Ashecliff. Cawley reveals that Chuck is also Andrew’s doctor, Dr. Sheehan, and the entire investigation was in fact a final attempt to save Andrew from being lobotomized. The idea was to act out the fantasy that the former marshal often trapped himself in, hoping he would come to terms with what had happened before extreme measures had to be taken.

The bright side is, this works. The downside is, it only works for like a day.
The book ends with Dr. Sheehan talking to Laeddis, only to have the patient address him as “Chuck”, proving that he had in face regressed yet again. The story ends with Andrew Laeddis being led away by orderlies to lobotomized.

This story has interrogations, suspense, well-written characters, and a story that just refuses to completely reveal itself right up until the very end. It’s a hold-your-breath sort of mystery that contains just the right number of twists and turns to keep you reading. The only real criticism I have is about all of the flashbacks Teddy has during the book—I get you think you miss your wife dude, but good lord, SHUT UP.
Teddy is an amazingly complex character by the end, if only because we find out about his problem. While not relatable, he is a character you can’t help but root for and then sympathize with once we learn the truth.
The Ashecliff staff, especially Cawley and Sheehan, are written in a way that makes you feel like you can’t trust them, but then you feel they honestly care about Teddy and want him to feel better. Once the points of their elaborate scheme are laid out, it’s hard to deny that these are men who are dedicated to their work and dislike the idea of resorting to drastic medical procedures to fix the crazies.

Shh… I’m hiding from the doctors.

Unfortunately a lot of the other characters kind of blur together and don’t seem too important in the long run, save for the Warden who is majorly uncomfortable working with a dangerous mental patient in such a way. Though I can’t take much off for this, because they really are unimportant in the long run, save for occasionally trying to tell Teddy about the game.
Lehane offers a very different kind of detective story, and he delivers is wonderfully. Everything about this story flows so smoothly, and the details are given in just the right amount at just the right time (other than the flashbacks. Seriously Dennis, stop that). It could even be considered an interesting commentary on the duality of all of our lives.

Well… maybe not ALL of our lives.

So, back to my question. If the book and movie practically the same, is that a good thing, or a bad thing?
It’s a good thing. A very, very good thing. Both give off an old-school noir detective vibe, and Leo DiCaprio is always a good thing no matter what the Academy says. I can’t honestly say which you would be better off with, which is why I chose only to review the book. Just trust me when I say that everything said here could easily apply to the film, and make your judgment based on that.

Seriously, can’t you give him just ONE Oscar?

Keep an eye out for my next review of James Alderman’s I See A Darkness, available on Amazon!

One thought on “I swear I’m not crazy!: Shutter Island Review”